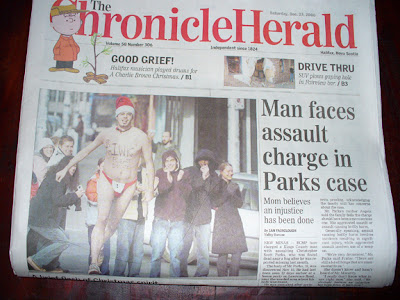 Collideascope Animation Studios did a little fund raising this year. Instead of doing the usual in-house Secret Santa thing, we decided to pool all our loose change together and see how much money the 75+ employees here could raise in 4 weeks for the
IWK Children's Hospital
(a local care and treatment center for kids with illness).

We raised $2000 total then Collideascope founders/producers doubled it! Making a grand total of $4000 raised for charity! Unfortunately for Mark "The Nature Boy" Cappello, he lost a little wager in the process. His department raised the least amount of money, thus he had to run around the block at -3 degree weather in underwear only. Witness the horror first hand here:

At first I thought the "Man Faces Assault Charges in the Parks Case" was about Mark. :O)