I had my first Industry Day at Sheridan. It was an awesome experience!

I handed out the award for Best 2D Animation (in which Collideascope sponsored a $1000 cash prize for the winner) to Eduardo Avenir for his film Lion's Den. This was not an easy decision, there were 8 films out of the 90 classically-animated shorts we screened that I totally particularly loved and were all brilliant for character, story, acting, and design in every way, it wasn't easy to pick just one. Maybe next year we'll figure out a way to split the award amongst the top three equally somehow, because it was a rough decision to make, but it was fun to watch and participate.

130 films in 6 hours!
Talk about exhausting, but there was lots of amazing concepts from traditional to CG to stop motion, with a wide range of graphic styles and design.

Meeting some of the 24 students I had hired last summer was very cool as well. It felt like a reunion, seeing their final films, watching how well they had progressed and how well they had done was truly inspirational.

I was blown away at some of the post production that students were able to make for the film, I have no idea how they found the energy to put some much work into adding paint, complex camera moves, crazy compositing tricks, rack focus, Foley style sound effects, fantastic music,

and TONS of After Effects. Simply Amazing!

Surprisingly (and thankfully) lots more Flash animation this year too, nearly all of it rough and fully animated in Flash, it was beautiful to see, it's too bad it's taken soooo long for it to catch on in colleges, but finally students can and do experiment in Flash to produce some stunning animation. It was as if Collideascope had started a small revolution for a few of the graduating students that had returned to college to finish their final year and spread the word of what the software could do. After a 4 month internship here the knowledge of Flash had spread all over, and a few used its tools to create some wonderful frame-by-frame animation. 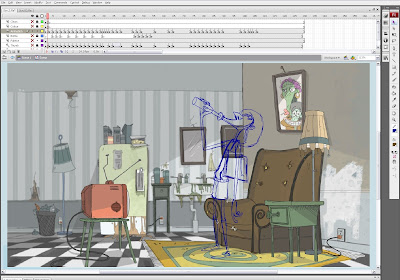 From the sketch blog of Mark Anthony. 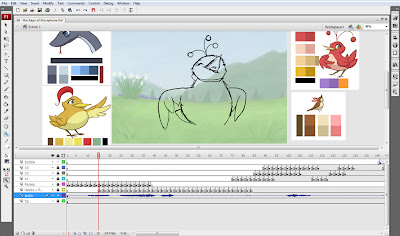 From the sketch blog of Ewen Nguyen.

Another aspect I was blown away with was all the students' preparation for this epic event! Thousands of printed business cards, posters, portfolios and show reels, all very professional, some with booths setup with tons of concept art and 'behind the scenes' materials from their film. Overall very impressive.

I had a great time and I hope I'm not too busy next year to go again and again, it was a nice and well organized showcase of over 100 graduating student's works and definitely worth the trip.

I'd like to thank your studio for seeing something in my film that made you award me the award! You guys are awesome...and obviously made my day a lot more wicked. Sorry I didnt' get a chance to thank you afterward and also for making you guys wait when you announced my name (i was eating crackers in the back food table while the awards were happening).

No problem man, it was my pleasure, I had a great time there!

Ron,
I am going in to my 3rd year at Sheridan and have assisted with Industry Day the last 2 years. I was very pleased reading your comments about the day. Seeing what the industry is interested in has really assisted me in choosing what I want to bring to my final film and my industry day booth. Please continue to attend as I look forward to seeing you in 2 years (or sooner)

Wow, nice to see students trying Flash more, and doing such epic films too, and all hand-drawn! Fantastic!

130 films in one day? WOW!
You must have been tired after that.

Wow what a nice post i am so inspired here could you more share here i will be back to you as soon as possible and also i have some information for you just click here animations. I think you will inspire here.
Thanks for sharing...