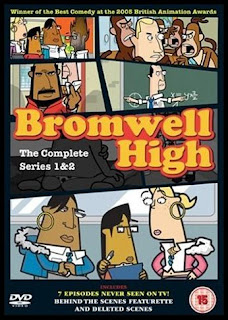 Now available on DVD in the UK!
International purchases have seen the show screened in the United States on BBC America, on The Box in the Netherlands, dubbed to Spanish on Cartoon Network's Adult Swim in the Latin Americas, on ABC in Australia, on TVNZ's TV2 in New Zealand, and also dubbed in French for the Canadian Télétoon network.

In 2005 it was awarded the Best Comedy Prize at the
British Animation Awards. It had high ratings during its 2005 run on the UK's Channel 4. Since then it's a huge hit through out Australia and the Netherlands.

There are some other differences between the UK and Canadian versions of the show, notably that the UK version has a longer and slightly different version of the opening credits and theme, and the UK broadcasts were in the 16:9 (widescreen), while the Canadian versions are cropped to a 4:3 aspect ratio.

A UK DVD release was originally planned for early 2006 - in connection with which a 15 minute Making of Bromwell High short was certified by the British Board of Film Classification as a '15' on 31 January 2006 - but was subsequently cancelled. The thirteen episodes were certified as '15' on 30 August 2006, apart from Keisha's in Love, which was classified as a '12', for the release of the complete series as a two-disc set on 2 October 2006. This release contains all 13 episodes (seven of which have never aired in the UK), and extras include the previously-prepared Making of Bromwell High short, deleted scenes and outtakes, commentary on the episode Sweets and the original animatic storyboard for Baby Boom.

1x01: Tolerance
First Aired: 1 February 2005
Our three girls prepare a presentation on the theme of tolerance, a subject which highlights the multi-cultural diversity within Bromwell High, but which Latrina dismisses out of hand as being "for gays". Keisha and Natella become arch rivals in a bid to win a prize which seemingly doesn't exist.

1x02: Police Story
First Aired: 8 February 2005
When a prevalent mobile phone thief continues to evade the local police, Inspector Lehman decides to pay Bromwell High a visit. Lehman advises maverick Headmaster Iqbal that he will be leaving PC Carter at the school in a bid to catch the thief, and threatens that if Iqbal does not comply with the police, they will clamp down on his illegal animal trade.

1x04: No More Teachers
First Aired: 22 February 2005
After a sensational performance at the school music evening, Mr Anderson, the English teacher, is offered a career as a pop star, leaving the rest of the teachers to ponder their own pathetic and unrewarding careers in the classroom. Depressed and dreaming of pastures new, they resign with immediate effect on their own very personal routes to fame and fortune, and Iqbal is faced with the problem of replacing an entire staff.

1x05: Fire Drill
First Aired: 1 March 2005
Keisha's fascination with pyromania has spiralled out of control and she is unable to stop herself setting fire to things, including the school premises. Iqbal's real problems start, however, when one of Keisha's fires inadvertently highlights the fact that Bromwell High has no wheelchair access.

1x06: Valentine's Day
First Aired: 8 March 2005
It's Valentine's Day at Bromwell High but Natella has persuaded our laydeez to give it a miss this year on the basis that it is a meaningless market event created by greeting card companies to boost sales figures. Keisha and Latrina are none too pleased with Natella when Miss Dickson decides to banish all pupils without cards to "ugly class", but things start to look up for the girls as Davis - the coolest boy in the school - is seen putting a Valentine's card in Keisha and Natella's box. Who is it meant for?

1x07: Goodbye Mr. Crisps
First Aired: 15 March 2005
Iqbal and Mr Bibby need to raise money quickly to solve Bromwell High's latest financial crisis, so when Natella introduces Iqbal to her new friend, posh Katie, who she met at the National Science Competition, Iqbal is ecstatic - and amazed - to learn just how much some children's parents are willing to pay for a decent education.

1x08: Baby Boom
First Aired: 22 March 2005
Latrina's mum has just given birth to yet another baby, which Latrina accidentally brings into school in her bag. In a ploy to get rid of the baby in a spot that she has not previously used, Latrina swaps the infant with the sex education teacher's doll. Will the teacher even notice?

1x10: Prefect
First Aired: 5 April 2005
Keisha's behavioural problems have reached epic proportions and it is time for Iqbal and Mr Bibby to take drastic measures. To Natella's extreme anguish, they appoint Keisha as a school prefect. Keisha's mission is to reduce crime levels in the school, which she manages through a carefully orchestrated campaign of violence and threatening behaviour.

1x11: Natella Takes Charge
First Aired: 12 April 2005
When the girls innocently play around with a bomb that has been left in the playground, it unsurprisingly ends with a scene of chaos and destruction. In order to fund the necessary renovations, Iqbal and Mr Bibby arrange for Albanian Chicken Nuggets to sponsor Bromwell High, resulting in a drastic change to the school curriculum...

1x12: Drama Queen
First Aired: 19 April 2005
Martin and Carol Jackson's marriage is in tatters, and Carol decides to put her energy into organising a school play to exorcise her woes. Latrina is given the star role but encounters an extreme bout of stage fright. Meanwhile, Iqbal and Bibby have managed to secure funding from various banks and need to decide how to invest it. A hard-fought battle between the teachers ensues, each one bidding to secure desperately needed cash for their departments.

1x13: Sweets
First Aired: 26 April 2005
When the girls find themselves in possession of a truck-load of black market sweets, they quickly discover that the sweets are - quite literally - mind-blowing. With an education article being written about "Heads and their Deputies", this is Iqbal and Bibby's chance to shine. But will the journalist be distracted by the newly formed sweets racket in the playground, and by the recent spate of exploding pupils?