Not many Canadian studios still do rough keys & in-betweens for frame-by-frame traditional animation anymore, it's a dying and overly-expensive art form. But we still do, we feel lonely still being one of the only places in North America to hand draw and fully-animate broadcast animation with Flash.

Many still think the ways of paper-cut-out-style (Harmony/Toonboom), or 3D/CG animation, or shipping it all over-seas is the way to go, the way of the future. We're still staying competitive with pricing, and keeping the animation looking old-school with the classical approach, and we'll hold on to those principles for as long as we can.

We still have a feature-style system of rough posing, in-betweens/breakdowns and ink & paint departments, including all our designs and background layouts are all still done with paper and pencil. Somehow we keep finding clients that want that hand-drawn-look to it. So we've been lucky so far.

Traditionally trained animators should have the chance to animate and draw shouldn't they? That's what they love to do, that's what they dream of doing, that's what they've been doing their whole lives, it would be a shame that students coming out of college would face the world and rarely get a chance to draw on a cartoon, only push pre-built objects around. It seems so sad.

Collideascope's been using Flash for 10 years, for the past 6 years we've fluctuated from 10 to 100 artists and animators, depending on how busy we got and how many projects we tackle at once. Through it all we've learned a lot, it's still far from easy, each new series brings new challenges, but our techniques are simple, we design, storyboard, draw, animate and color as much as we can in-house and discover more efficiencies every year.

Other series that are phenominal at pushing Flash in creating the illusion of beautiful classical-style movement are Being Ian, Fosters, Mythunerstood and El Tigre. These shows all still use the very flat/symbol-swapping/puppet-style of 2D/motion-tweeen animation, but they do incredibly well of achieving a traditional look and feel to the actions and acting. Then there's the incredible style of the Copernicus music videos, who are in a classs of their own.

On this note, here's the awesome demo reel of John Gallagher, a senior character animator who's been with us for 4 years now, like most of us here, he simply uses Flash as digital paper, have a look: 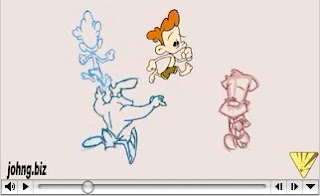 Yep, that's definitely one of the things I liked and admired about the studio when I was there.